In this tutorial, we will learn how to upload a program to Raspberry Pi Pico using SWD and also debug with SWD. Till now, we have been using drag-and-drop method for uploading program to Pico. But if you want to use SWD Interface of Pico to program and debug, then this tutorial is for you. Learn the steps for Programming Raspberry Pi Pico with SWD and also debugging the code with SWD, OpenOCD and GDB.

A Brief Note on SWD

Have you ever worked on developing an Embedded System Application? If the answer is yes, then you might be familiar with the term ‘Debugging’. In embedded systems, which are mainly designed with a single task (or a very small number and specific set of tasks) in mind, the process of debugging and testing is very critical as we often work as low as CPU Register level.

There are several hardware and software solutions for debugging embedded systems. One such offering is called Serial Wire Debug or SWD in short. SWD is a Debug and Trace Port embedded into the silicon of most modern ARM based Microcontrollers and Microprocessors.

The combination of SWD, GDB (GNU Debugger) and OpenOCD (an on-chip debugger which supports debugging, in-system programming and boundary scan for embedded systems) is a very powerful debugging setup, especially for ARM Cortex series of Processors.

Like all ARM Cortex processors, the Raspberry Pi Pico also has dedicated hardware for debugging via the SWD Interface. The two wires required for SWD Debugging are called SWDIO (bidirectional SWD Data) and SWCLK (SWD Clock).

On the Raspberry Pi Pico, the SWD Pins are separated from the rest of the GPIO Pins and are placed at the bottom of the Board.

The 2-wire SWD Interface of RP2040 on the Raspberry Pi Pico board allows you to do the following:

As mentioned earlier, GDB and OpenOCD are required for debugging any ARM Cortex Processor. So, we will now install these two in our host system, which in my case is a Raspberry Pi running the latest Raspberry Pi OS.

To understand the SWD Protocol and control the ARM Cortex Processor (two in case of RP2040), you need a special translator called OpenOCD. Let us now see how to install OpenOCD in Raspberry Pi.

NOTE: The following steps will install OpenOCD in /home/pi/pico/openocd.

This will install all the tools require by OpenOCD. Next, we will clone the OpenOCD into our host and install OpenOCD. Enter the following commands one after the other.

I will take some time to build and install OpenOCD. Sit back and relax. 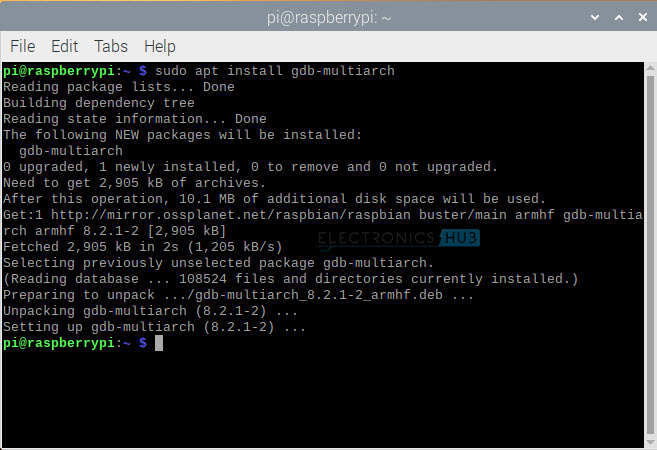 We will see how to debug using OpenOCD and GDB in the next section.

The following table shows all the necessary connections between Raspberry Pi and Raspberry Pi Pico that you need to make. 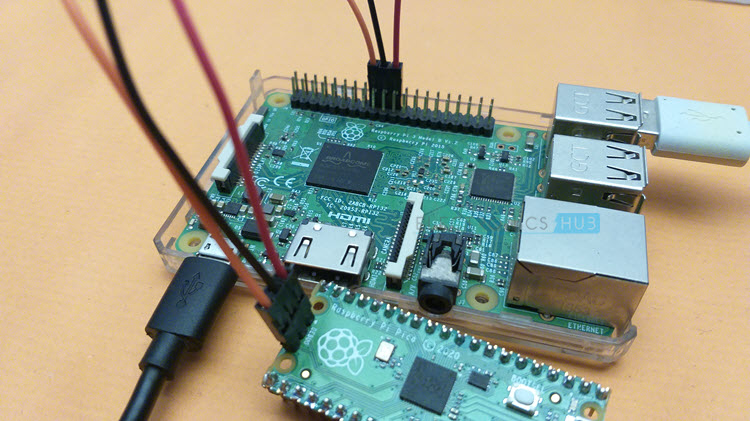 For drag-and-drop programming via USB, we used the .uf2 file. But OpenOCD uses .elf file to upload the program.

Use the following commands to Program Raspberry Pi Pico with SWD. 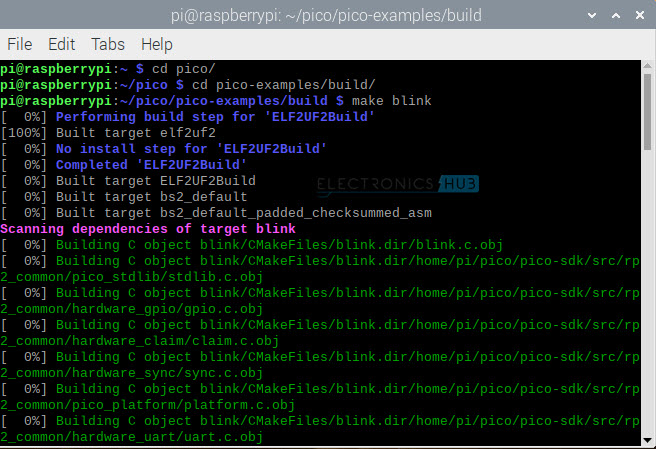 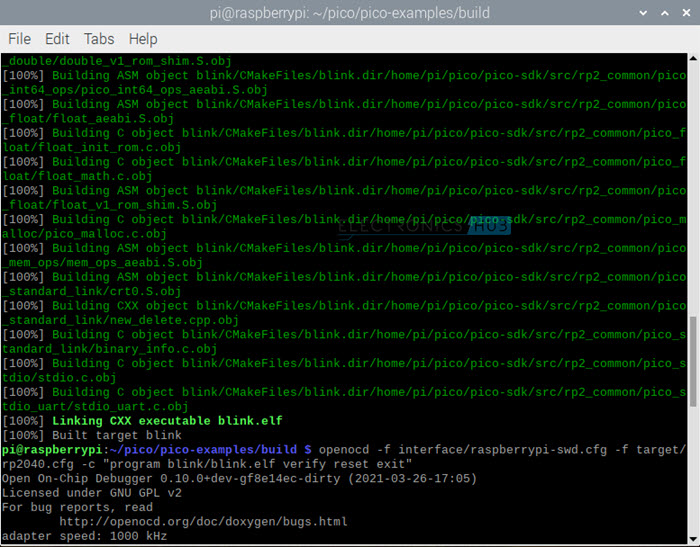 The above command will invoke OpenOCD to program the blink.elf file to Raspberry Pi Pico, reset the board and exit the OpenOCD. If everything goes well, your terminal should display something like this and the LED on Raspberry Pi Pico should start to blink. 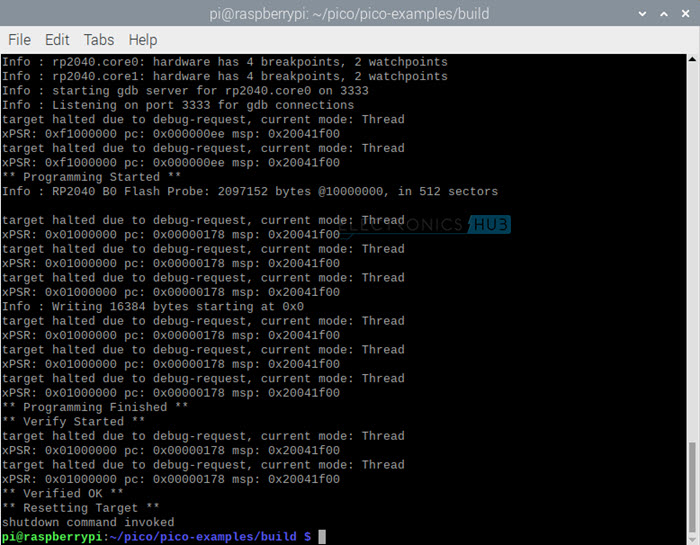 Let us now see how to debug the code suing SWD, OpenOCD and GDB. We already installed GDB in the previous step. Now, to include the debug related settings in the build files, you have use the CMake directive ‘ -DCMAKE_BUILD_TYPE=Debug ’. 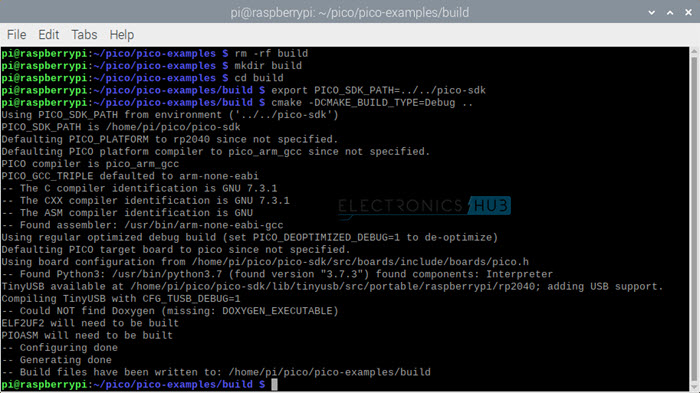 Let us use the ‘hello_world’ example and build for the serial variant. You cannot use USB based serial connection for SWD Debugging as the USB Device will be disconnected when stopping the processor core in debugging.

After making the connections, open the hello_world UART directory and build it.

Use OpenOCD to open the GDB Server. 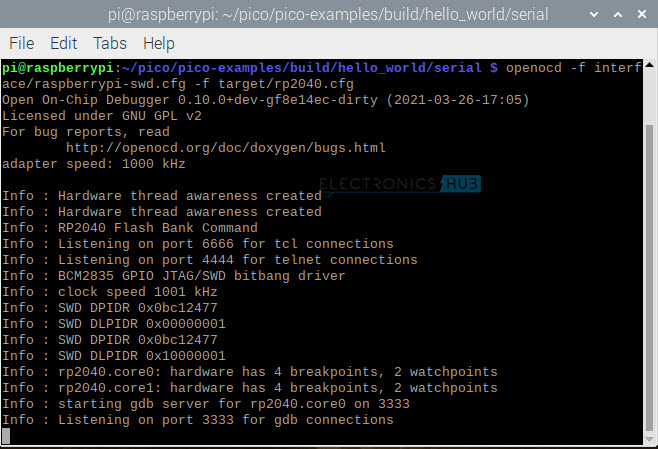 Keep this terminal as it is and open another terminal window and browse to UART Serial directory in the build directory.

To load the program into the flash memory of Raspberry Pi Pico, use load command. 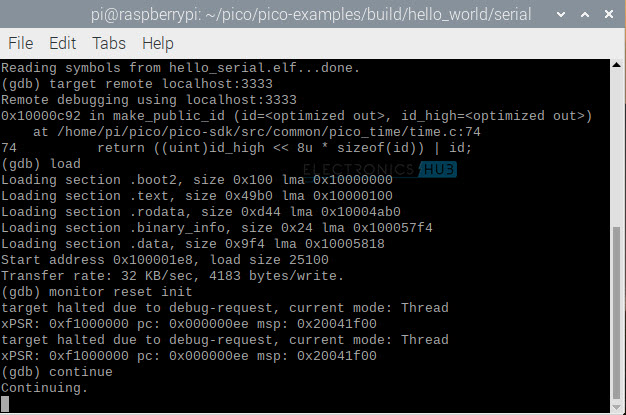 If you are familiar with GDB commands, you can explore them.

New: Have your heavy machinery delivered safely with BOLK

When The Sun Makes Drinking Water