The triboelectric nanogenerator (TENG) is a fascinating technology that dramatically speeds up healing. It reduces healing time to one-fourth of the normal healing process. It can heal even nasty wounds of a diabetic patient. Moreover, the bio-degradable triboelectric nanogenerator (BD-TENG) is, as the name suggests, biodegradable. This means there is no need to open up the patient’s body for taking out the implant.

At present there are 73 million diabetes patients in India (world figure is 406 million), out of which fifteen per cent develop foot ulcers, which are difficult to heal. Moreover, accident victims also receive very nasty wounds. Most of these patients require hospitalisation for treatment, wherein electrotherapy is often applied using bulky machines and complicated wiring. However, these machines, if not controlled properly, could generate oxygen radicals inside the wound, which may cause cancer.

Recently, a low-cost wound dressing has been developed in the US that could dramatically speed up healing. The method converts the patient’s own body motion into electrical energy with the help of a wearable nanogenerator band and applies gentle electrical pulses at the site of an injury. In laboratory tests, the bandage with nanogenerator reduced healing time to only three days as compared to nearly two weeks for the normal healing process.

Acute and chronic wounds represent a substantial burden on healthcare worldwide. Use of electrical stimulation in this method lowers the financial burden of the patient. The device is as convenient as putting a bandage on the skin. 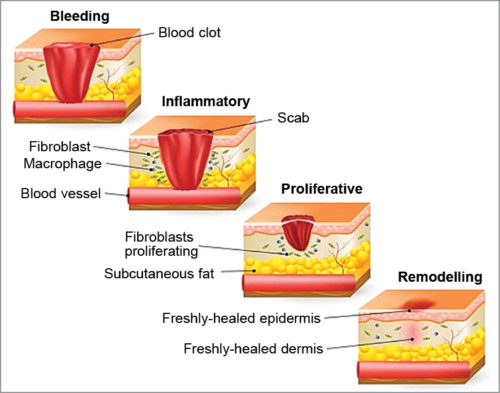 Nature of these pulses is similar to the way the human body generates an internal electric field. In fact, these low-power pulses do not harm healthy tissues like traditional high-power electrotherapy devices might. Also, exposing cells to high-energy electrical pulses causes them to produce almost five times more reactive oxygen species—a major risk factor for cancer and cellular aging compared to cells that are exposed to nanogenerators.

Low-power pulses boost viability for a type of skin cell called fibroblasts, and exposure to the nanogenerator’s pulses encourages the fibroblasts to line up, which is a crucial step in wound healing. This also produces more biochemical substances that promote tissue growth.

To power the electric bandage, a wearable nanogenerator is made by overlapping sheets of poly-tetra-fluoro-ethylene (PTFE), copper foil and polyethylene-terephthalate (PET). The nanogenerator converts skin movements, which occur during normal activity or while breathing, into small electrical pulses. Current flows to the two working electrodes placed on either side of the skin wound to produce a weak electric field, which heals the wound within three days. Scientists attribute faster wound healing to enhanced fibroblast migration, proliferation and differentiation induced by the electric field.

Mechanism of the wound healing process

When skin is injured, the body sets into motion an automatic series of events in four overlapping phases to repair the injured tissues.

In this phase, healing starts at the onset of injury. The body activates its emergency repair system of blood clotting to stop the bleeding and forms a dam to block drainage. Meanwhile, platelets, which is one component of blood, start their activity. When there is a wound, platelets release mediators and growth factors for repair of tissues. An enzyme called thrombin is released that initiates the formation of a fibrin mesh, which strengthens platelet clumps into a stable clot.

Bacteria is destroyed and debris is removed by neutrophils, a type of white blood cell that enters the wound. Neutrophils then leave, and specialised cells called macrophages arrive to continue scavenging work. These cells also secrete growth factors and proteins to facilitate tissue repair.

In this phase, shiny deep red granulation tissues fill the wound bed with connective tissue and new blood vessels are formed. Then, wound margins contract and pull towards the centre of the wound.

Next, epithelial cells (cells that line the body, skin, organs, etc) arise from the wound bed or margins and begin to migrate across the wound bed in leapfrog fashion until the wound is covered with epithelium.

In this phase, new tissues remodel and slowly gain strength and flexibility.

In case of diabetes, due to uncontrolled high blood glucose level, ability of white blood cells to fight bacteria is greatly reduced. Also, blood circulation slows down, making it more labourious for the body to transfer nutrients to the wound site. That is why the wound takes longer to heal.

After a physical injury, in a moist wound environment, there is a lateral voltage gradient of 140mV/mm at the wound edge that decays to 10mV/mm at 500 to 1000 micrometres from the wound edge. In Fig. 3, it can be seen that the intact epithelium (right) pumps sodium and chloride ions in opposite directions to generate and maintain a trans-epithelial electrical potential difference (TEP) of approximately 45mV, which is necessary to maintain healthy skin.

Injury to the skin collapses the TEP locally at the wound to zero and significant electric fields build up around the wound (red arrow), which also generate large electric currents flowing out of the wound (blue arrows). Electric fields are intrinsically directional. These are oriented towards the wound, with the wound as a negative cathode.

Epithelial cells respond to the physiological strength of electric fields by migrating to the cathode, suggesting these use the natural, endogenous wound as the directional cue to migrate into the wound, thus enhancing healing.

A piezoelectric nanogenerator converts external kinetic energy into electrical energy via action by a nanostructured piezoelectric material such as ZnO, GaN, BaTiO3 and the like.

A triboelectric nanogenerator (TENG) is an energy-harvesting device that converts external mechanical energy into electricity by a conjunction of triboelectric effect and electrostatic induction. As for this power generation unit, in the inner circuit, a potential is created by triboelectric effect due to charge transfer between two thin organic/inorganic films that exhibit opposite tribo-polarity. In the outer circuit, electrons are driven to flow between two electrodes attached to the back of the films to balance the potential.

Triboelectric effect is a type of contact electrification on which certain materials become electrically charged after these are separated from a different material with which they were in contact. Rubbing a plastic pen with a polyester cloth can build up triboelectricity.

Most everyday static electricity is triboelectric. Polarity and strength of charges produced differ according to the material, surface roughness, temperature, etc. Polyurethane foam is the most positively-charged, steel has no charge and ebonite is the most negatively-charged.

After coming into contact with other material, a chemical bond is formed between parts of the two surfaces, called adhesion. Charges move from one material to the other to neutralise their electrochemical potential. This is what creates the net charge imbalance between objects. When separated, some of the bonded atoms keep extra electrons, while some give them away.

There are therapeutic effects of electrical stimulation on wound healing. It imitates the natural wound healing mechanism of the endogenous electric field to facilitate skin growth. An electric field is essential for directing many cellular processes that lead to orderly healing naturally.

Electrical stimulation decreases oedema around the electrode, stimulates growth of tissues, increases blood flow, causes fibroblasts to proliferate, induces epidermal cell migration and their growth, attracts neutrophils and macrophages, and so on.

The exceptional capability of the nanogenerator to generate periodic biphasic electric pulses by locally converting feeble mechanical displacements, such as body or muscle motion, is sustainable and biologically responsive. Besides, a nanogenerator can be made flexible with reasonably high output power density and energy conversion efficiency. Its multiple energy conversion mechanism, including both piezoelectric and triboelectric effects, allows a wide selection of materials and multiple design principles. Moreover, it is a very stable device.

The self-activated electrotherapy bandage device consists of two parts: biomechanical energy conversion part (that is, nanogenerator) and dressing electrodes made of gold (Au). As shown in Fig. 4, the nanogenerator is made by overlapping the copper (Cu)/PTFE electro-negative material layer with another copper (electro-positive) layer on different sides of the PET substrate. 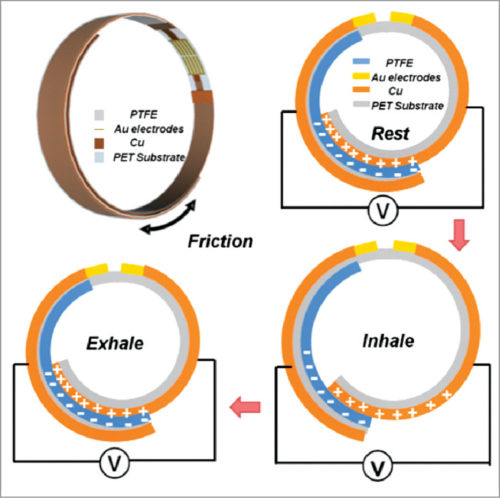 The PTFE layer can slide back and forth relative to the copper layer, and when worn by the patient generates sufficient voltage for wound healing due to movement of the body. Due to good flexibility of PTFE, the multilayer device matches the skin surface. The device is non-toxic. Overlapping area change drives charge flow towards or away from the two dressing electrodes and, thus, induces electric potential between them, which is maintained until the skin regeneration process is complete.

The two dressing electrodes are placed, as shown in Fig. 5, on each side of the wound and serve to generate an electric field that could penetrate into the dermis, and strengthen the endogenous electric field for enhanced wound healing. Further, the electric field strength outside electrode coverage drops quickly to a negligible value, as compared to the high value in between. Hence, the electric field has minimal impact on the surrounding tissue or organs.

Fig. 5: Electric field in a nanogenerator

There is another type of medical nanogenerator, that is, biodegradable triboelectric nanogenerator (BD-TENG), which can be implanted to harvest in vivo biomechanical energy, and then degraded and resorbed in the body without any adverse effect after completing its work cycle. So, no surgery is needed to remove it.

The nanogenerator generates DC pulsed electrical field between two complementary micro-grating magnesium electrodes, which successfully repair damaged cells like neuron and other types of cells. BD-TENG is a multi-layered structure comprising biodegradable polymers and resorbable metals. Open circuit voltage of BD-TENG can reach up to 40V approximately, and the corresponding short-circuit current is one micro-amp. The encapsulated structure consists of friction layers, electrode layers and spacers, as shown in Fig. 6. 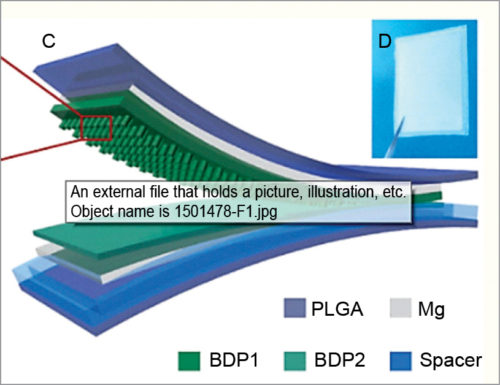 When an external force brings two BDP friction layers (polylactide-glycoblide, or PLGA, and polycaprolactone, or PCL) into contact, electrons are transferred from PLGA to PCL and retained on both BDPs, resulting in surface triboelectric charges. Subsequent release of the external force causes separation of PLGA from PCL films and forms an electrical potential between these two films that drives electrons through external load and screens inductive charges on both electrodes.

This performance can be tuned from 10V to 40V by changing the composition of polymers. After four weeks of implantation, the device is completely biodegraded. Mg electrodes are hydrolysed. This process is known as vertical separation mode of TENG. PLGA and PCL both are biodegradable polymers. 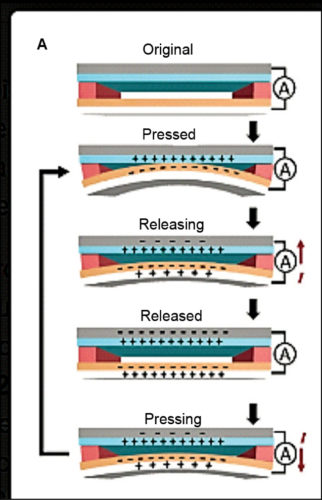 TENG is a fascinating technology that dramatically speeds up healing. It reduces healing time to one-fourth of the normal healing process. It can heal even nasty wounds of a diabetic patient. Moreover, BD-TENG is biodegradable. This means there is no need to open up the patient’s body for taking out the implant. In the near future, this will be a very powerful tool in the hands of doctors.

Rathindra Nath Biswas is a 1964-batch chemical engineering graduate from Jadavpur University, Calcutta. He was awarded a certificate for designing Benzol Plant by Giprokoks, USSR, and Certificate of Honour by Indian Institute of Metals. He has published 35 research papers in various journals. He retired from service as head – MECON, Durgapur

This article was first published on 10 February 2020 and was recently updated.

Pivot Power Brings Tesla & Fastned Together to Build Superhub in...

iWave Introduces Wi-Fi 6 Enabled System On Modules And Single Board...